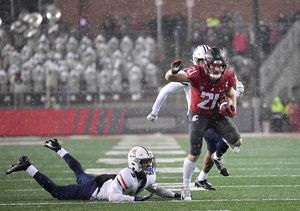 <p><p>PULLMAN – Running back Max Borghi had a signature game behind a veteran Washington State offensive line anchored by seniors.</p></p><p><p>Slotbacks Travell Harris and Calvin Jackson Jr. dazzled, and longtime Cougars linebacker Jahad Woods made an impact all around the field.</p></p><p><p>“They took the field with a passion and an energy and a focus that wasn’t going to be matched,” WSU interim coach Jake Dickert said of his team’s influential senior class, which includes the aforementioned standouts. “They were really determined to show what they can do one more time on our home field, but also to get us bowl eligible.</p></p><p><p>“There’s still a lot to play for.”</p></p><p><p>WSU’s departing players made the most of their last appearance at Gesa Field.</p></p><p><p>Senior players, who were honored prior to the game, accounted for every touchdown to guide the Cougars in their 44-18 rout of Pac-12 South last-place Arizona on a bitter Friday night.</p></p><p><p>The Cougars (6-5, 5-3 Pac-12) have qualified for a bowl berth for the sixth consecutive full season.</p></p><p><p>It was another installment to one of the best stories in college football this year. WSU started the season 1-3 and its prospects didn’t look great a month ago, when half its coaching staff was let go. Since then, the team is 2-2, and it’s most recent triumph wasn’t short on thrilling moments.</p></p><p><p>“These older guys, this senior class has been through so much,” Borghi said. “So many highs and lows, and we really stuck together. It’s obviously gotten us closer. Getting bowl eligible again and keeping that tradition alive, it means a lot. It’s great to go out on that note.”</p></p><p><p>WSU’s inspired offense piled up 13 “explosive” plays – rushes over 10 yards and passes over 15 – and gained a staggering 8.3 yards on its average down. Six touchdowns were divvied out equally between Borghi, Harris and Jackson.</p></p><p><p>In the words of safety George Hicks III, Borghi “got the fireworks started,” compiling 73 of his career-high 139 yards and one of his two touchdowns in a hard-running first half. He was effective when bouncing out into space.</p></p><p><p>“It was just fun to see him with the ball in his hands,” Dickert said of Borghi, who scored on a short TD just after a 43-yarder early in the second quarter to supply the Cougars a 28-7 cushion.</p></p><p><p>“He’s a confident runner. That was classic Max Borghi.”</p></p><p><p>The Cougars noticed Arizona’s tendency to play single coverage with its defensive backs near the line of scrimmage when expecting the run.</p></p><p><p>Harris and Jackson roasted their defenders in such situations, with the former logging a 30-yard score on a streak route late in the third and the latter providing a final highlight with a busted-coverage 78-yard touchdown with 8:37 to play.</p></p><p><p>“We knew it was a little too cold for them,” Harris said. “We knew they didn’t want to run. That’s what me and Calvin told (quarterback Jayden de Laura) and our coaching staff, and we showcased it.”</p></p><p><p>Gesa Field was cloaked in dense fog throughout the game, and snow fell heavily for stretches as the temperature dipped as low as 30 degrees.</p></p><p><p>The Cougars “loved it,” Dickert said.</p></p><p><p>The Wildcats (1-10, 1-7), whose hometown of Tucson hit a high of 83 degrees Friday, did not.</p></p><p><p>“Obviously, Arizona hated it a lot more than us,” Borghi added. “We were having fun with it, and I think they were pretty miserable.”</p></p><p><p>De Laura was “razor sharp” on deep balls, despite the elements, Dickert said. De Laura completed 13 of 22 passes for 259 yards and four touchdowns.</p></p><p><p>WSU didn’t commit a turnover and posted a season-best 223 rushing yards on 36 attempts (an average of 6.2 yards per try) as its lead swelled to as many as 30 late in the third quarter.</p></p><p><p>Woods stretched out for an interception to stamp the game closed in the fourth quarter.</p></p><p><p>“It’s super special for us to all ball out the way we did,” Woods said.</p></p><p><p>Spurred by its mainstay skill players and fireworks from de Laura, WSU’s offense kicked into gear after a choppy first quarter in which the Cougars were forced to punt twice.</p></p><p><p>But their defense swarmed the Wildcats enough to stop traces of early life from UA, and Borghi provided a spark on WSU’s second series, bursting through a lane in the middle on a draw play.</p></p><p><p>He evaded a referee, then powered past Wildcats defenders with a stiff-arm and a final surge to score from 26 yards out.</p></p><p><p>The Cougars amassed 172 yards and averaged 10 yards per play in a flashy second quarter that seemed to set the tone for the rest of the runaway result.</p></p><p><p>It was a balanced effort on the ground and through the air for WSU, which went up 14-0 after Harris tapped his toe inbounds on an 8-yard score – set up by his 32-yard grab down the seams.</p></p><p><p>“We did a good job early on of taking advantage of some of the things (the Wildcats) were doing in the run game and making them play a little bit more man, and that’s when Travell and (Jackson) got loose on the inside,” Dickert said.</p></p><p><p>Arizona, which struggled with penalties and poor field position in the first quarter, responded late in the second with Drake Anderson’s 71-yard run, followed by an 11-yard scoring lob from Will Plummer to Boobie Curry.</p></p><p><p>Yet the Wildcats didn’t have another encouraging sequence until the deficit was far too great to overcome.</p></p><p><p>WSU’s momentum surged just before halftime after senior Deon McIntosh ripped a 38-yard draw run and Jackson collected an on-the-money deep ball from de Laura in stride for a 43-yard TD that extended the lead to 21-7 with about a minute left.</p></p><p><p>Carried by superb play from their several seniors, the Cougars rolled from there.</p></p><p><p>“It meant everything,” Harris said. “Personally, I shed a small tear at the beginning. … To put a show on for the alumni and fans like we did, it’s an awesome feeling.”</p></p><p><p><span class=”print_trim”><!–[teaser id=984028]–></span></p></p><p><p><span class=”print_trim”><!–[teaser id=983877]–></span></p></p><p><p><span class=”print_trim”><!–[teaser id=984019]–></span></p></p>

← John Blanchette: One thing clear through Friday's fog was Washington State's seniors earning what they deserve
Aerosmith Share Early Recording Of ‘Movin’ Out’ From ‘The Road Starts Hear’ →