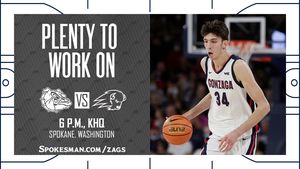 <p><p>The preliminaries went as expected with exhibition blowouts over Eastern Oregon and Lewis-Clark State, but Gonzaga coaches and players still compiled a to-do list.</p></p><p><p>It begins with offense – despite scoring 115 and 112 points against a pair of NAIA foes – defense and rebounding as the top-ranked Bulldogs usher in the regular season against Dixie State on Tuesday at the McCarthey Athletic Center.</p></p><p><p>At this point, it falls more in the fine-tuning category than major issues, but there’s a time crunch involved with No. 5 Texas visiting the Kennel on Saturday and the Zags taking on No. 2 UCLA and No. 9 Duke later this month in Las Vegas.</p></p><p><p>“It’s the end of the preseason so you’re always going to have a ton of things to work on,” said Brian Michaelson, who concludes his three-game stint as acting head coach Tuesday before Mark Few returns from a suspension for Saturday’s showdown. “Continuing to up our offensive execution and the way we execute our sets and the way we execute how we play after that is going to be really important.</p></p><p><p>“I don’t think we’re where we need to be there. Our rebounding can take a step. I know our numbers looked pretty good (plus 29 vs. LCSC) and I thought we had long stretches where it was really good and then we hit a patch early especially and a little patch in the second half where it wasn’t up to the standards that we need.”</p></p><p><p>The defensive stats also have been solid, limiting EOU and LCSC to shooting percentages in the low-to-mid 30s, but there’s room for improvement.</p></p><p><p>“Talking, communicating, defensive execution,” junior forward Drew Timme said. “Offense will come, but defense is something you have to grind out and come together as one unit. We just work on that and hitting our coverages right, we’ll be just fine.”</p></p><p><p>Gonzaga crushed Dixie State 112-67 last December, but the Zag roster has changed considerably. Returning players accounted for 43 of GU’s points while Dixie State’s top four scorers are back, led by guard junior Cameron Gooden (13.1) and senior forward Hunter Schofield (12.9).</p></p><p><p>“There’s definitely a lot of things that we can still improve on,” Gonzaga freshman guard Hunter Sallis said, “but that will definitely come as practices go on and we get a feel for each other because (there’s) a lot of new guys on this team.”</p></p><p><p>“We know this is going to be a theme of the year,” said Michaelson, adding that Dixie State “is a group that returns a bunch of guys from last year’s team that’s played together for multiple years. We’re going to be on the (opposite) end of that all year. We’re going to be super, super young (with) a lot of lineups that haven’t played in a Division I game, a lot of lineups that have never played together.”</p></p><p><p>Gonzaga’s starting lineup the last time it lost a season opener featured Blake Stepp, Cory Violette, Adam Morrison, Richard Fox and Tony Skinner. The 10th-ranked Zags fell 73-66 to Jameer Nelson and No. 17 Saint Joseph’s in 2003 at Madison Square Garden.</p></p><p><p>GU hasn’t lost a regular-season home opener since falling to Boise State in 1988. The Zags’ closest season opener in the last decade was a 77-69 win over Eastern Washington in 2011. They’ve won a school record 51 straight home games, the nation’s longest active streak.</p></p><p><p>Dixie State, picked 12th in the 13-team Western Athletic Conference, obviously is a heavy underdog against Gonzaga. The Trailblazers, based in St. George, Utah, are in the second season of a four-year transition to Division I. They finished 8-13 last season.</p></p><p><p>Last year’s game was close for a while, but Dixie State couldn’t slow down Gonzaga’s offense. The Zags shot 60.3% and held a 30-0 advantage in points off turnovers.</p></p><p><p>“They’re grown, they’re old,” Timme said. “They’re really experienced and played together a long time. They really push the ball, one of the few teams that really likes to go up and down with us, which is fun but it really tests your communication and defense.”</p></p>